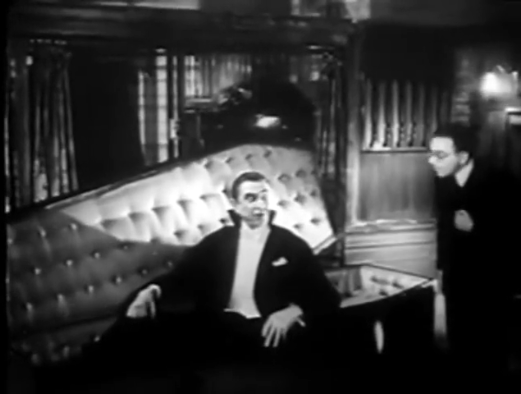 WE’VE GOT A BELFRY FULL OF ACTION, FUN, AND HORROR TODAY ON GOIN’ BATTY MONDAY!!!

The bats are up to bat today on Beta Max TV as SPOOKY SCARY MONTH continues with GOIN’ BATTY MONDAY!!!

First, we head to the hidden caves deep below stately Wayne Manor on DON’S Breakfast Serial for the original 1943 serial BATMAN. In Part 1, Don shares Chapters 1 – 5 which pit Batman against Japanese spy leader Prince Daka whose strange electronic device turns men into zombies that he controls by radio to do his evil bidding. Plus, there’s the Superman cartoon – SECRET AGENT. And watch closely as Don reveals Bruce Wayne’s mailing address!!!

Then, we fly across the Atlantic for more attempted world domination – this time with a vampire involved! From 1952, it’s VAMPIRE OVER LONDON (aka – Mother Riley Meets The Vampire). The evil scientist Von Housen, known as the Vampire (played of course by Bela Lugosi!), plans to take over the world with his inventions of destruction and his army of 50,000 radar-controlled, uranium-powered robots. At the moment though, he only has one robot and through a shipping mistake it’s been delivered to a hard working but somewhat offbeat woman named Mother Riley (Arthur Lucan). When she finds out Vampire’s plans, she does her wacky best to thwart his evil! Horror, sci-fi, and comedy collide in this final installment of the Mother Riley series and one of Lugosi’s last films.

Coffins and caves, robots and radar. And bats! Another treat for your B-movie bag from your home for B-movies…and saving the world!! Beta Max TV!!!