NOVEMBER 30:  SOME STROLLIN’ SPIRITS AND A NEW SOFA ON BEWARE THEATER – TODAY ON Beta Max TV!!! Check out the News tab‘s top story for more details!

NOVEMBER 28:  SOME DOESN’T LIKE SANTA – A TOUCH OF CHRISTMAS FOR MURDER MONDAY – TODAY ON Beta Max TV!!! Check out the News tab‘s top story for more details!

NOVEMBER 26: SOME LEFTOVER TURKEY AND A JUMP ON CHRISTMAS SHOPPING ON THIS WEEK’S FRIDAY FUN-TIME FIVE!!! – TODAY ON BETA MAX TV!!! (see below for details)

NOVEMBER 23:  SWORDS, SORCERY, AND PIES ON THE DUNGEON OF DR. DRECK – TODAY ON Beta Max TV!!! Check out the News tab‘s top story for more details!

NOVEMBER 16:  TIME FOR TURKEY AND TERROR – IT’S THANKSGIVING IN THE DUNGEON OF DR. DRECK – TODAY ON Beta Max TV!!! Check out the News tab‘s top story for more details!

NOVEMBER 11: THE LAST TREATS OF HALLOWEEN, A TASTE OF THANKSGIVING, AND A TIP OF THE HAT TO VETERANS IN THE FRIDAY FUN-TIME FIVE – TODAY ON BETA MAX TV!!! (see below for details)

SEPTEMBER 28 – BETA MAX TV UPDATE – WELCOME CANADA!!!First, because of some system modifications and updates, the Wednesday feature will not appear today. But…Beta Max TV is proud to announce that we are now available on Roku TVs and devices all over Canada!!! Simply search for BetaMaxTV in the channel store or on your Roku device and choose “add channel”

Now all our friends north of the border can enjoy the hundreds of hosted programs, and classic, cult, and forgotten movies, TV shows, animation and independent programs viewers all over the U.S.A have access to – and just in time for our Spooky Scary Month programming that kicks off this Friday! And to celebrate, we’ll be adding a brand new episode of Beware Theater on Thursday! Tell all your Canadian friends the good news!

Thanks for watching and supporting Beta Max TV!!! 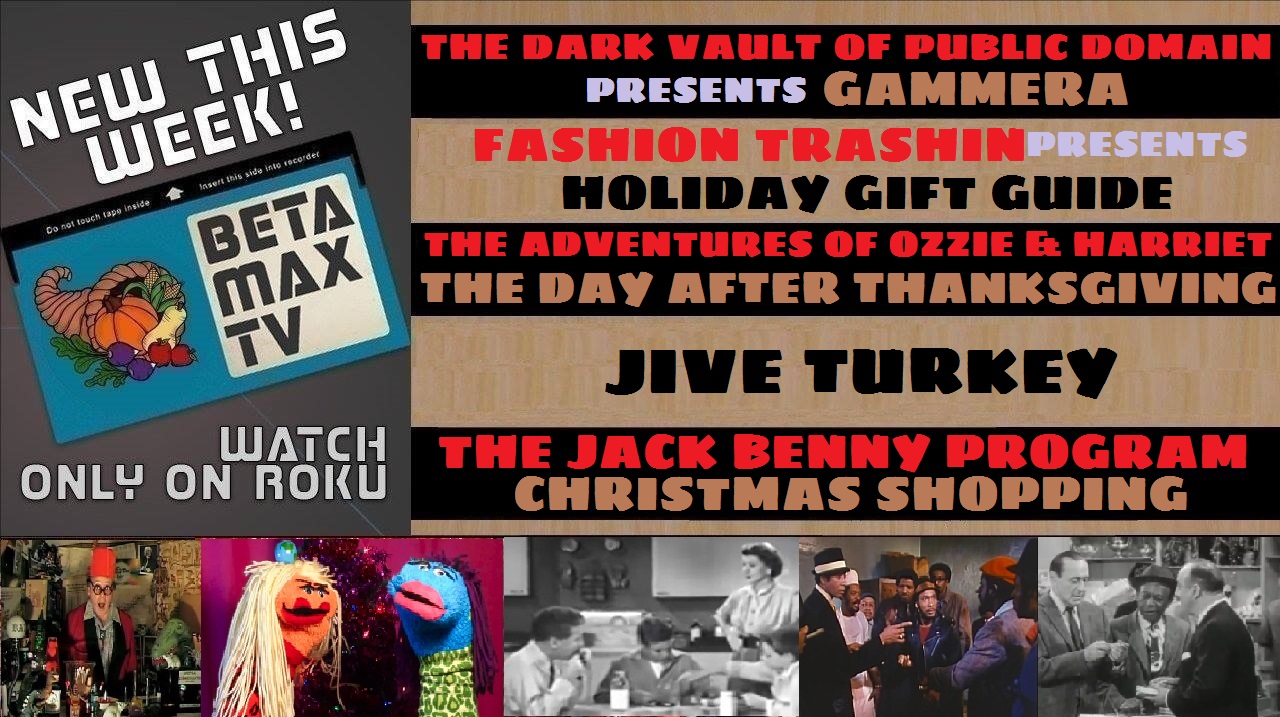 SOME LEFTOVER TURKEY AND A JUMP ON CHRISTMAS SHOPPING ON THIS WEEK’S FRIDAY FUN-TIME FIVE!!!

There’s a couple of tasty helpings of turkeys and some great tips and suggestions to get your Christmas shopping going in this week’s Beta Max TV FRIDAY FUN-TIME FIVE!!!

Uncle Pete‘s got a great gift idea, a sinister snowman, and a giant sized problem for The Dark Vault Of Public Domain presentation of GAMMERA.  An atomic blast rouses a gigantic flying, fire-breathing turtle that sets its sights on destroying Tokyo in this debut feature for the raucous reptile. And between trailers, gift spotlights, a cartoon called the Snowman and our feature, Uncle Pete works on a size enhancement formula for an unnamed client and the experiments create a huge problem!

How about some gifts you would never want to get and maybe not even give?  Find them here in the HOLIDAY GIFT GUIDE on Beaucoup Askew’s Fashion Trashin.  Cinnamon and Diamond’s guest is Roxxy Quattro who shares some interesting Christmas gift ideas. Santa pops in unexpectedly and gets a little frisky!

Did you have enough turkey on Thanksgiving day to last you for a while?  Or maybe you’re more like Ozzie and Ricky and David in THE DAY AFTER THANKSGIVING on The Adventures Of Ozzie And Harriet.  The day after Ozzie and the family have Thanksgiving dinner at a relatives, they’re convinced they have eaten enough turkey for a good long time. But Ozzie and the boys develop a craving for turkey and start searching for leftovers anywhere they can think of! (1952)

And this next helping isn’t just turkey – it’s JIVE TURKEY!  In this 1974 serving of classic blaxploitation, a Harlem kingpin finds himself and his gang in a deadly turf battle with Italian mobsters while the police close in on his operations.

And finding the right gift can be challenging especially for Jack Benny.  Join Jack and Rochester for CHRISTMAS SHOPPING on The Jack Benny Program.  Jack and Rochester go Christmas shopping and meet an assortment of interesting characters – creating more than a little humorous exasperation for all involved!. guests include Mel Blanc and Richard Deacon

Have a snack, grab some gifts and join the fun of this week’s FRIDAY FUN-TIME FIVE on your home for B-movies… and sometimes more than one holiday at a time!  Beta Max TV!!! 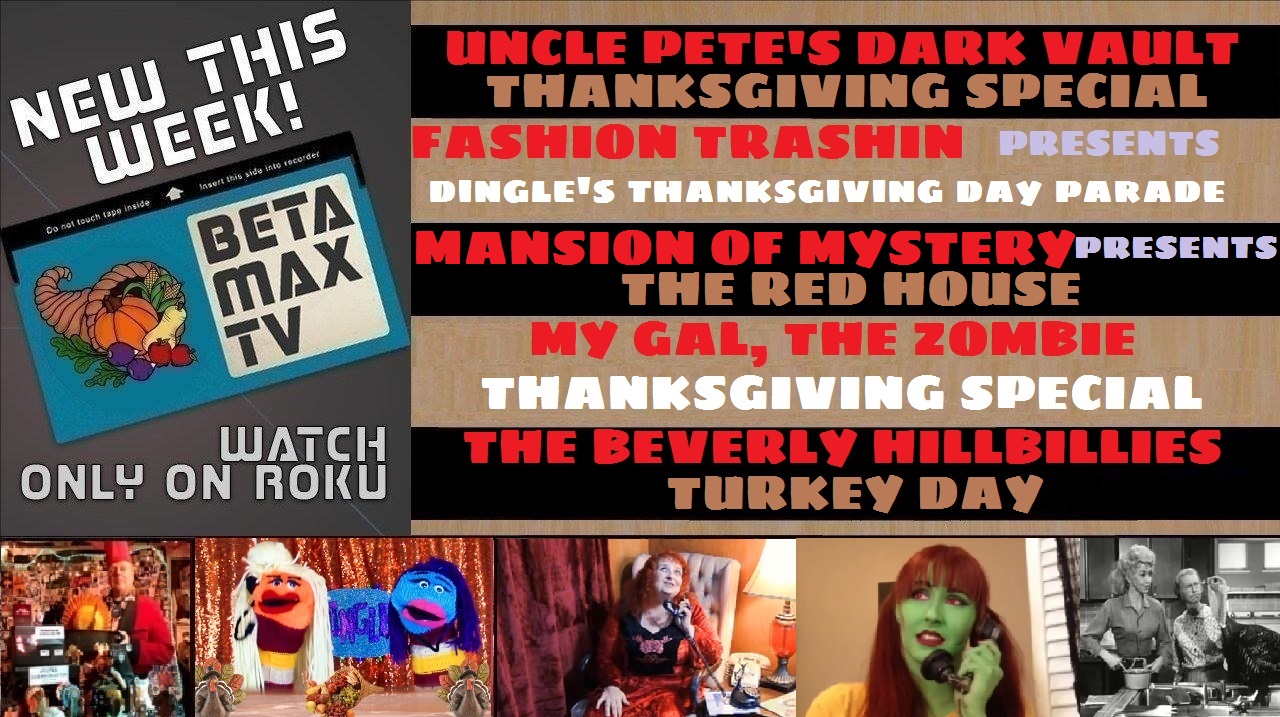 We’re talking turkey with cooking tips, eating tips, and a parade for our Thanksgiving-filled FRIDAY FUN-TIME FIVE this week!

Uncle Pete’s cookin’ with VIto Gold gas (and the new Vito Gold oven) as he presents UNCLE PETE’S DARK VAULT THANKSGIVING SPECIAL.  Uncle Pete hosts a turkey filled special with a Calvin and the Colonel cartoon, tips on carving and The Giant Claw (1957) about a giant destructive bird creature from another dimension.

It’s not Thanksgiving without a parade and we’ve got on in Beaucoup Askew’s Fashion Trashin presentation of the DINGLE’S THANKSGIVING DAY PARADE!  Cinnamon and Diamond host the 150th Dingle’s Department Store Thanksgiving Day Parade on Sunrise Blvd. in Hawlywood, Fallifornio! Hey, who doesn’t love a parade for Thanksgiving!

The trials and tribulations of cooking that bird are front and center in the Mansion Of Mystery presentation of THE RED HOUSE.  A man hides a terrible secret from his adopted daughter about a spooky house in the woods.(Edward G. Robinson) Scarlet’s Thanksgiving preparations get complicated by CJ being on a trip and Sgt. Wednesday’s interruptions.

And the bird’s the word – and maybe the guest – for the BEVERLY HILLBILLIES’ TURKEY DAY!  The Clampetts prepare for a big Thanksgiving dinner but Elly May decides the turkey would make a better pet than a main course! (1963)

It’s a bunch of turkeys – in a good way – for the Thanksgiving edition of the FRIDAY FUN-TIME FIVE on your home for B-movies…  and delicious bird shows!  Beta Max TV!!! 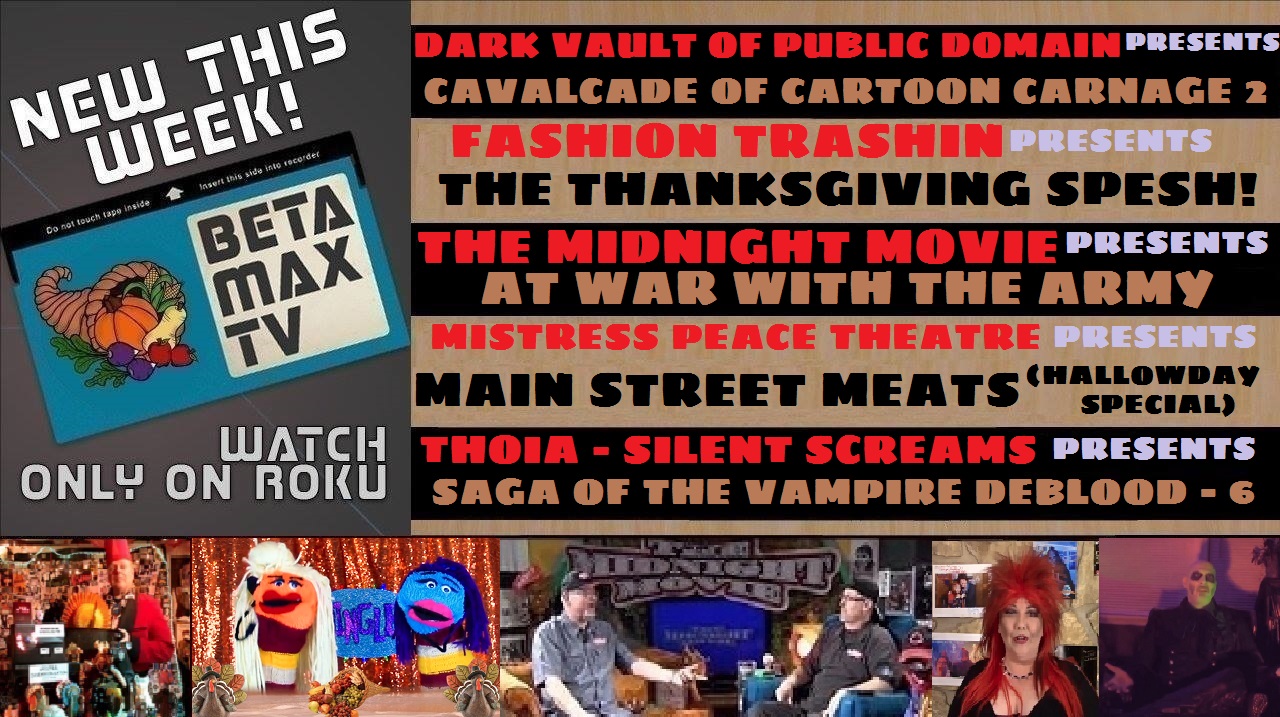 THE LAST TREATS OF HALLOWEEN, A TASTE OF THANKSGIVING, AND A TIP OF THE HAT TO VETERANS IN THE FRIDAY FUN-TIME FIVE – TODAY ON BETA MAX TV!!!

We’re finishing up a couple Halloween goodies, taking a peak at some turkeys and stuffing, and joining the army in this week’s Beta Max TV FRIDAY FUN-TIME FIVE!!!

Uncle Pete’s getting animated in anticipation of the holiday season with the CAVALCADE OF CARTOON CARNAGE – PT. II on The Dark Vault Of Public Domain!  Uncle Pete presents classic cartoons from the 20s through the 60s including Popeye and his nephews, Betty Boop, Oswald, Felix the Cat, Owl Jolson, and Molly Moo Cow and engages in a little artistic endeavor too!

Food, family, and fun (or something) are the buzzwords for Beaucoup Askew’s Fashion Trashin episode THE THANKSGIVING SPESH!  It’s a special Thanksgiving episode of Fashion Trashin as Cinnamon and Diamond celebrate the holiday of eating as they travel home to be with their families for Thanksgiving.. Should be pretty fun!

It’s Veterans Day and we’re joinin’ up as Triv and the gang present Dean Martin and Jerry Lewis in AT WAR WITH THE ARMY on The Midnight Movie.  The team plays a nightclub duo inducted in the army where they get in one wacky scrape after another while working on an act for the base talent show.. (1950)

There are still some goodies in that trick or treat bag!  Join Mistress Malicious for MAIN STREET MEATS (The Hallowday Special) on Mistress Peace Theatre!  Mistress Malicious shares footage from this year’s Horror Hound convention and shows this 2017 indie film about a struggling family-run meat business that finds a profitable way to “serve” their customers.

And the celebration of the Year of the Vampire, continues in the SAGA OF THE VAMPIRE DEBLOOD – Pt. 6 on The Horror Of It All’s Silent Screams.  The Marquis DeBlood concludes his 6 part saga with The Last Rites OF Van Helsing this week in the final installment of The Curse Of The Vampire story.

Halloween, Thanksgiving, Veterans Day – we’re celebrating all of them in this week’s FRIDAY FUN-TIME FIVE on your home for B-movies… and celebrating!!! Beta Max TV!!!