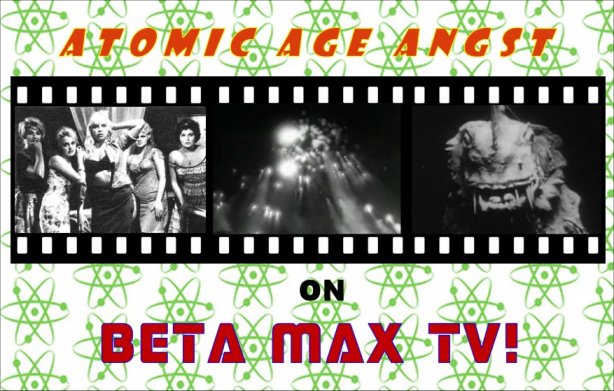 HORRORS OF SPIDER ISLAND (1960) gains more than eight legs in presenting the predicament of a troupe of knock-out exotic dancers and their manager marooned on an island where uranium has recently been discovered and mined. That could explain the giant mutant killer spider on the loose! This German-produced favorite of cinematic cheese with a dose of atom and a whole lot of Eves will have you shouting “GAAARYYYY!!”

Mario Bava‘s scintillating signature cinematography is the highlight of Italy’s vision of disaster in 1958’s THE DAY THE SKY EXPLODED. When an atomic rocket malfunctions on an exploration mission, the results threaten the existence of the planet Earth. Will the end of the world as we know it be averted?

Finally, one from the U.S. of A. as oceanographers and the government team up to discover the culprit behind the mysterious deaths swimmers and fisherman along a local stretch of beach in THE PHANTOM FROM 10,000 LEAGUES (1955). Turns out a radioactive rock on the sea bottom is mutating the great wildlife of the ocean… and a marine biology professor is responsible! (Must be one of those “mad prof” types, the only explanation why anyone would try to make monster sealife happen.)