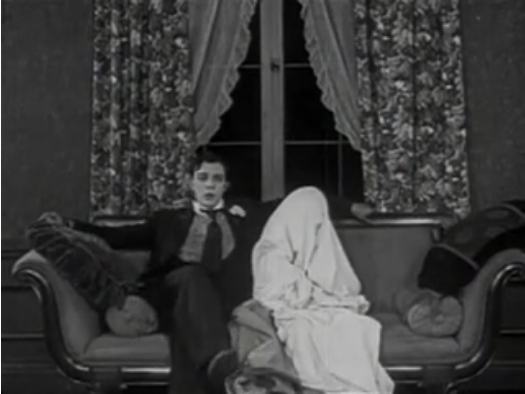 Happy Halloween!  The day is finally here and we’ve got three great features to fill your video trick or treat bag! First it’s the BETA MAX TV HALLOWEEN EXTRA SPECIAL filled with laughs and music – 5 treats from Beaucoup Askew’s Ezmerelduh the Halloween Bitch and Halloween music videos from Xposed 4heads, Spookey, and Arachna Of The Spider People. Next, it’s the master of the pratfall – Buster Keaton – in THE HAUNTED HOUSE. A bank clerk (Buster) thwarts a robbery but is forced to take it on the lam when he’s mistaken for a robber. He hides in a scary old house that’s not only the robbers hideout with crazy booby traps but is filled with a troupe of actors in spooky costumes rehearsing their routines (but Buster doesn’t know that)! (1921). Then is the British Halloween comedy film THINGS HAPPEN AT NIGHT. When a homeowner’s house and daughter are possessed by a mischievous poltergeist, he calls in a ghost chaser and his insurance agent on Halloween night to chase the spirit away. (1947)

Make your Halloween night complete with today’s three-headed festival from your home for B-movies… and Spooky fun!  Beta Max TV!!!