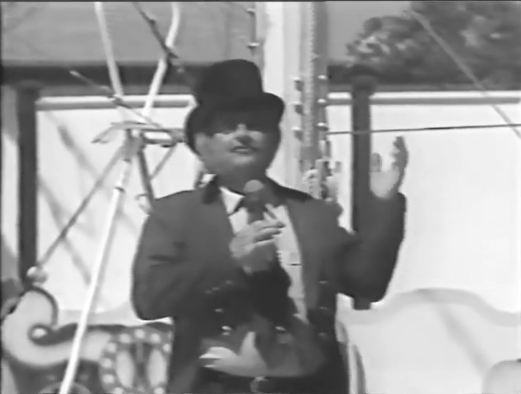 Robert James Keeshan was born June 27, 1927 in Lynbrook, NY.  After enlisting in the Marine Corps reserve during WWII, he attended Fordham University, receiving his bachelor degree in education.  Bob started his television career as Clarabell the Clown on the Howdy Doody show.  After starring in a couple other children’s TV shows, his idea for a new show was picked up by CBS TV in 1955.  The show – CAPTAIN KANGAROO – ran for 30 years before Bob decided to end the show.  He continued to be an advocate for children’s television and education until his death in 2004.  Soon after his death, Keeshan’s grandson became the youngest man to climb Mt Everest and buried a picture of Captain Kangaroo at the summit.

So to celebrate the Captain’s birthday, Beta Max TV has two offerings featuring Bob Keeshan.  First, a circus television special from 1977 called CIRCUS FANTASTIC with Captain Kangaroo as the ringmaster and Bob “Gilligan” Denver as special guest.  Then, it’s an episode of CAPTAIN KANGAROO from 1961.  The Captain decides to clean up the treasure house and asks for help.  But he gets more help than he expected and some of it isn’t really all that helpful!

So celebrate the 95th birthday of one of the legends of children’s television with your home for B-movies… and Captain Kangaroo!  Beta Max TV!!!