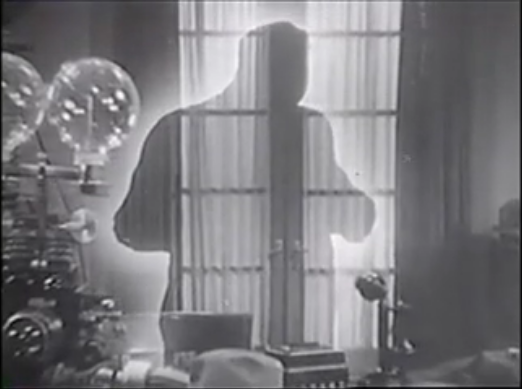 DOES THIS BELT MAKE ME LOOK INVISIBLE?  FIND OUT IN PART 2 OF THE VANISHING SHADOW ON DON’S BREAKFAST SERIAL!!!

Tune in today for Don’s Breakfast Serial as Don presents chapters.6 – 10 of THE VANISHING SHADOW!  This 1934 Universal serial features the amazing inventions of Stanley Stanfield (Onslow Stevens) – including his invisible ray belt that can turn him in to a mere shadow.  He uses this and other futuristic devices as he seeks to bring to justice the corrupt businessmen who caused his father’s death.  But little does he know, his best girl’s father is the man he’s seeking!  Plus Don’s got cartoons from the 3 Stooges – Lastest Gun In The West – and Mother Goose swingin’ it!

Get your next dose of action from Don’s Breakfast Serial with THE VANISHING SHADOW – Pt. 2 on your home for B-movies…and a swingin’ goose or two!  Beta Max TV!!!