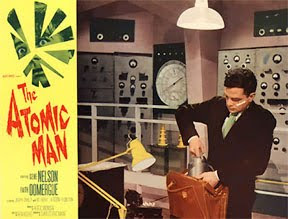 ALCHEMY, ESPIONAGE, AND A LITTLE TIME TRAVEL – WITH A GOOD DOSE OF RADIATION – IT’S A SCIENCE FICTION SMORGASBORD ON BETA MAX TV!!!

Pull out your lead-lined cloak and dagger for the science fiction espionage drama THE ATOMIC MAN (1955) today on Beta Max TV!  Atomic scientist Dr. Rayner/Jarvis has developed an alchemical transmutation process by which he can turn common metal into tungsten. But some evil forces want to steal this process and destroy his work. And this becomes pretty obvious when he turns up floating in the Thames River with a bullet in his back. But he’s also charged up with many times the lethal level of radiation and he’s still alive. When he regains consciousness, he doesn’t seem to make sense until a savvy reporter determines the doctor’s experiments have somehow caused him to slip several seconds into the future. And now it’s up to the doctor and the reporter to stop an evil double taking the doctor’s place and keep the doctor’s work from being destroyed.

Also know as Timeslip, it’s an espionage drama with a good dose of science fiction – and radiation. THE ATOMIC MAN – on your home for B-movies…and lethal radiation! Beta Max TV!!!