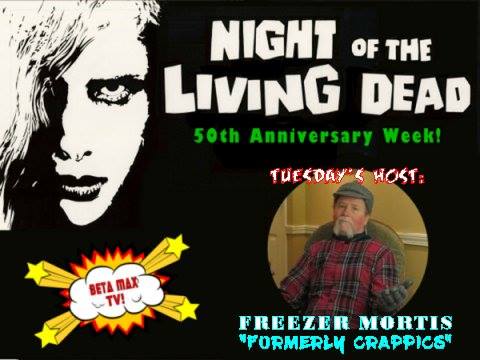 On October 1, 1968, director George Romero’s first feature-length film – entitled NIGHT OF THE LIVING DEAD – premiered at the Fulton Theater in Pittsburgh, Pennsylvania. A relatively low budget production about the dead rising to walk the Earth as flesh-eating ghouls, it would become one of the most influential horror movies of the latter half of the 20th century.

This week, NIGHT OF THE LIVING DEAD turns 50 years old and Beta Max TV is celebrating the event with a multi-day ghoul-fest featuring several different presentations of the classic by some of our featured hosts.

For those of you who may not be familiar with this classic, originally (pre-release) entitled Night Of The Flesh Eaters, it tells the gruesome story of the dead rising to walk the Earth. No one seems to know the reason, but one thing is certain – they are hungry for human flesh. The story centers around a group of people who, through chance, have all sought the same isolated farm house as a refuge from the human-hungry ghouls. But with the ghouls seemingly impervious to harm – with the exception of a serious head-shot – and their numbers increasing, all seems lost for our stranded survivors.

Tuesday, Beta Max TV welcomes Freezer Mortis of Formerly Crappics as he contributes his cool, relaxed, camo-onesie vibe to offset the horror on-screen of undead flesh eaters stalking and closing in on a group of terrified strangers who meet up in a farm house to forestall what appears to be their inevitable destruction (and digestion). But this week, Freezer has the ol’ double-barreled shotgun handy too, just in case!

And just for ghouls and giggles, each day, we’ll present a little tidbit of trivia about the movie. Flesh-eating Fun-Fact #1: The haunting opening theme music was originally used in episodes of the early 60s television series “Ben Casey” and “Naked CIty”!

So barricade yourself in the basement and chillax with your head-bopping mallet and Freezer Mortis in the first installment of a very special mid-week showcase on Beta Max TV of what is undoubtedly the godfather of zombie flicks!