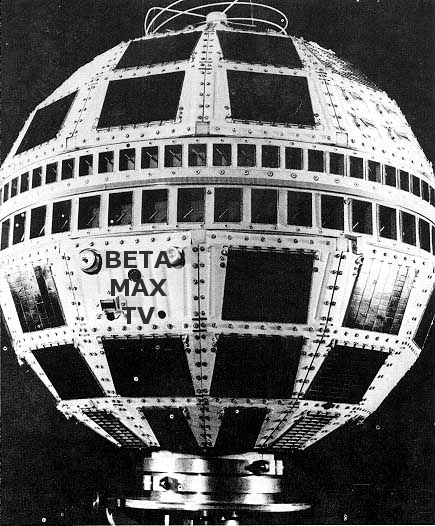 IT’S A BETA MAX TV TELSTAR TRIBUTE!!!
July 23, 1962 – The Telstar communication satellite relayed trans-Atlantic television signals between the United States and France for the first time in history. The broadcast included newscasters Walter Cronkite and Chet Huntley, part of a Cubs-Phillies baseball game and President Kennedy.
June 23, 2018 – in celebration of the first trans-Atlantic television broadcast, we here at Beta Max TV have traveled to the year 1962 for some other first broadcasts, outer space adventure, and the possible end of all humanity as we know it!
While the French were seeing Walter Cronkite for the first time, viewers in America were seeing Gene Rayburn host THE MATCH GAME for the first time. This pre-disco-theme-song, pre-Charles Nelson Riley version featured 2 celebrities (see if you actually recognize more than one) each teamed with 2 contestants marching words for money.
A valuable satellite like Telstar needed protection from alien attacks and when it came to keeping space secure, you couldn’t do better than Supermarionation star Steve Zodiac and the crew of the FIREBALL XL5! In PLANET 46 (the 1st episode), Steve and the crew are able to stop a planetomic missile from destroying Earth but they’re captured and forced to ride in the next barrage of Earth-bound bombs.
And it wasn’t very publicized, but we have it on good authority that the waves from Telstar created a space rift that would cause the future nuclear holocaust that starts off our third feature – CREATION OF THE HUMANOIDS (1962). After the destruction of most of mankind, the number of silver skinned human-like work robots increases as does their sophistication. But not all humans are happy with the robots and not all robots are happy with the humans. And stuff happens! Side note – this movie features Dudley Manlove, also seen in Plan 9 From Outer Space, released this week in 1959.
So take a ride on the Beta Max TV satellite to some out-of-this world fun in today’s Telstar Tribute on the place for B-movies to the max…and more!!! Beta Max TV!