JULY 28:  THIS FARM IS WHERE THE WILD WITCHES ROAM – ON THE DUNGEON OF DR. DRECK!!!  Check out the News tab‘s top story for more details!

JULY 26:  MOVIES AND MAYHEM AT THE DRIVE-IN – TODAY ON BETA MAX TV!!!  Check out the News tab‘s top story for more details! 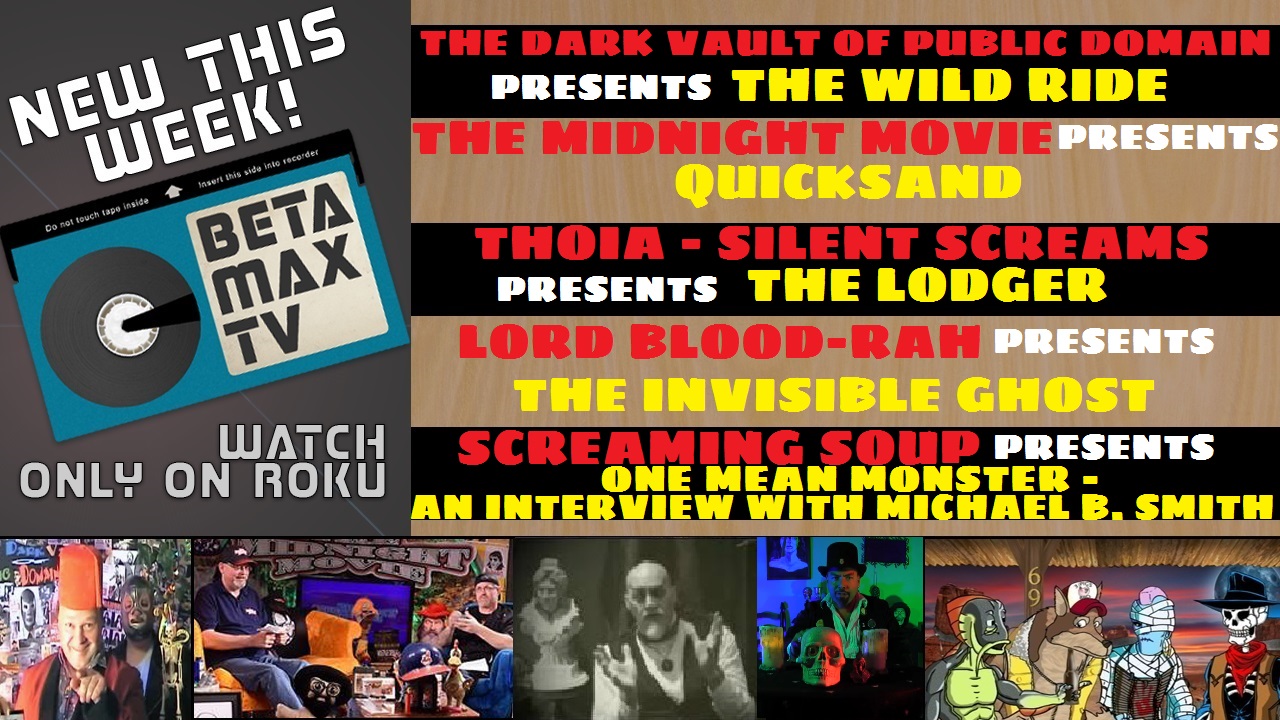 CRIMES AND CARS AND GHOSTS AND STUFF – THIS WEEK ON THE FRIDAY FUN-TIME FIVE!!!

From counterculture to film culture – with a little crime for good measure!  That’s the mix for this week’s Beta Max TV FRIDAY FUN-TIME FIVE!

Uncle Pete’s in the garage working on some problems with the Dark Vault hot rod for the Dark Vault Of Public Domain presentation of THE WILD RIDE – a 1960 counterculture hot rod film about a rebel dirt track racer and his gang. Starring Jack Nicholson

On The Midnight Movie, Triv, Ritch and the gang check out QUICKSAND, a Mickey Rooney film about a man who, wanting to show his girl a nice time, takes $20 from his boss planning to repay it but through a series of unfortunate events falls into a life of crime, (1950)

On THOIA – Silent Screams, Marquis DeBlood presents THE LODGER, a 1927 British thriller directed by Alfred Hitchcock about a strange resident of a boarding house who the landlady suspects my be responsible for a series of London murders.

Lord Blood-Rah’s Nerve Wrackin’ Theatre presents THE INVISIBLE GHOST with Bela Lugosi as a doctor in a strange mansion plagued by murders after his wife dies but continues to appear to the doctor sending him into a trance-like state and perhaps driving him to murder! (1941)

And it’s a behind the scenes look at a Hollywood monster – or at least the actor who played one – on Screaming Soup – ONE MEAN MONSTER – AN INTERVIEW WITH MICHAEL BAILEY SMITH.  Deadwest interviews Smith who has dozens of TV and movie credits including Super Freddy in Nightmare On Elm Street 5 and Belthazor and Grimlock on the TV series Charmed.

Do some hot roddin’, and crime-spreein’ – but watch out for strangers – in the FRIDAY FUN-TIME FIVE on your home for B-movies…and Jack Nicholson!  Beta Max TV!!! 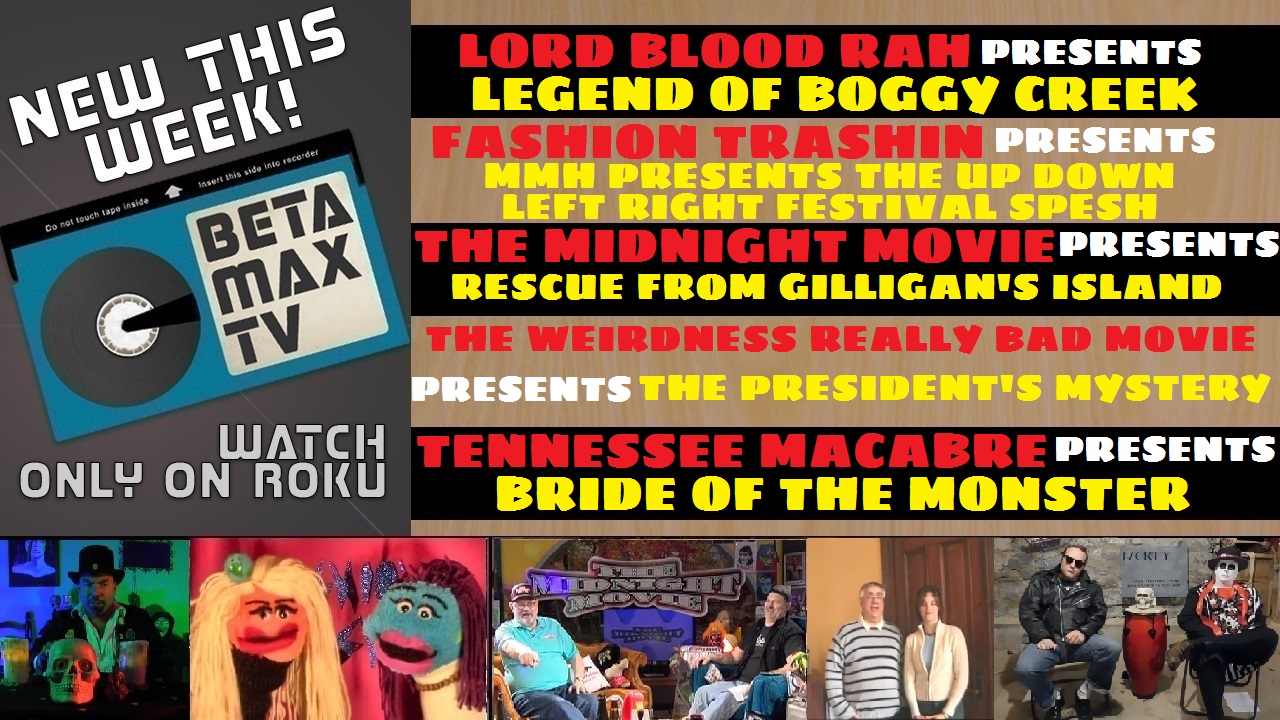 MUSIC, MONSTERS, MYSTERY, AND GILLIGAN – THIS WEEK ON THE FRIDAY FUN-TIME FIVE!!!

Lord Blood-Rah’s Nerve Wrackin’ Theatre gets boggy but not bogged down with the 1972 documentary-style monster-drama LEGEND OF BOGGY CREEK about the Bigfoot-type monster that’s been sighted in Arkansas since the 40s.

Do the Castaways finally get home?   Check out The Midnight Movie where Triv, Ritch and the gang get their Gilligan on and show the 1978 TV movie RESCUE FROM GILLIGAN’S ISLAND the follow-up to the TV series where the castaways get rescued back to civilization and must try to readjust to the world they’ve been apart from for so long.

On The Weirdness Really Bad Movie, Dave and Holly head to the McKinley Monument in Canton for THE PRESIDENT’S MYSTERY a 1936 mystery about a millionaire who comes up with a plan to disappear and take all his money. Based on a story idea suggested by FDR.

And on Tennessee Macabre, Deke, Morty, and Grim are joined by Criswell for BRIDE OF THE MONSTER, a 1956 Bela Lugosi-Tor Johnson Ed Wood film about a scientist using atomic power to create super-human beings.

Grab some popcorn and settle in for some classic cheeze (and cheese too) in the FRIDAY FUN-TIME FIVE on your home for B-movies…and snacks!  Beta Max TV!!!